"Live or Die? Make your choice.."
Saw The Ride

New for 2019, THORPE PARK Resort invited us to try out a preview of Jungle Escape, a jungle themed escape room, and one of their four unmissable events listed on the Resort Map for this year.

In terms of puzzles, this review is spoiler free. However, it does talk about what’s inside, so look away now if you want to keep it a surprise!

Located in the old I’m A Celebrity building, the attraction does take advantage of some of the previous (amazing) theming inside - but has been rerouted, chopped and changed enough, so it feels like a fresh, new (and most importantly) fun experience. Some parts are genuinely unrecognisable and we spent a few seconds wondering just where in the building we were - which we quickly snapped out of because we had tasks to complete with our team!

In terms of teams, guests enter in two groups of 6. These two teams compete against each other during the tasks and the trials. If you’ve done an escape room before, then you might think that being grouped together with complete strangers would restrict or spoil the experience (we were genuinely sceptical of this - and a bit worried) but it doesn’t happen one bit! The way the story is set up and delivered to you breaks any inhibitions and, as you’re competing against a rival team, you (really) quickly end up happily working together as if you’ve known each other for years, to try to beat the others! 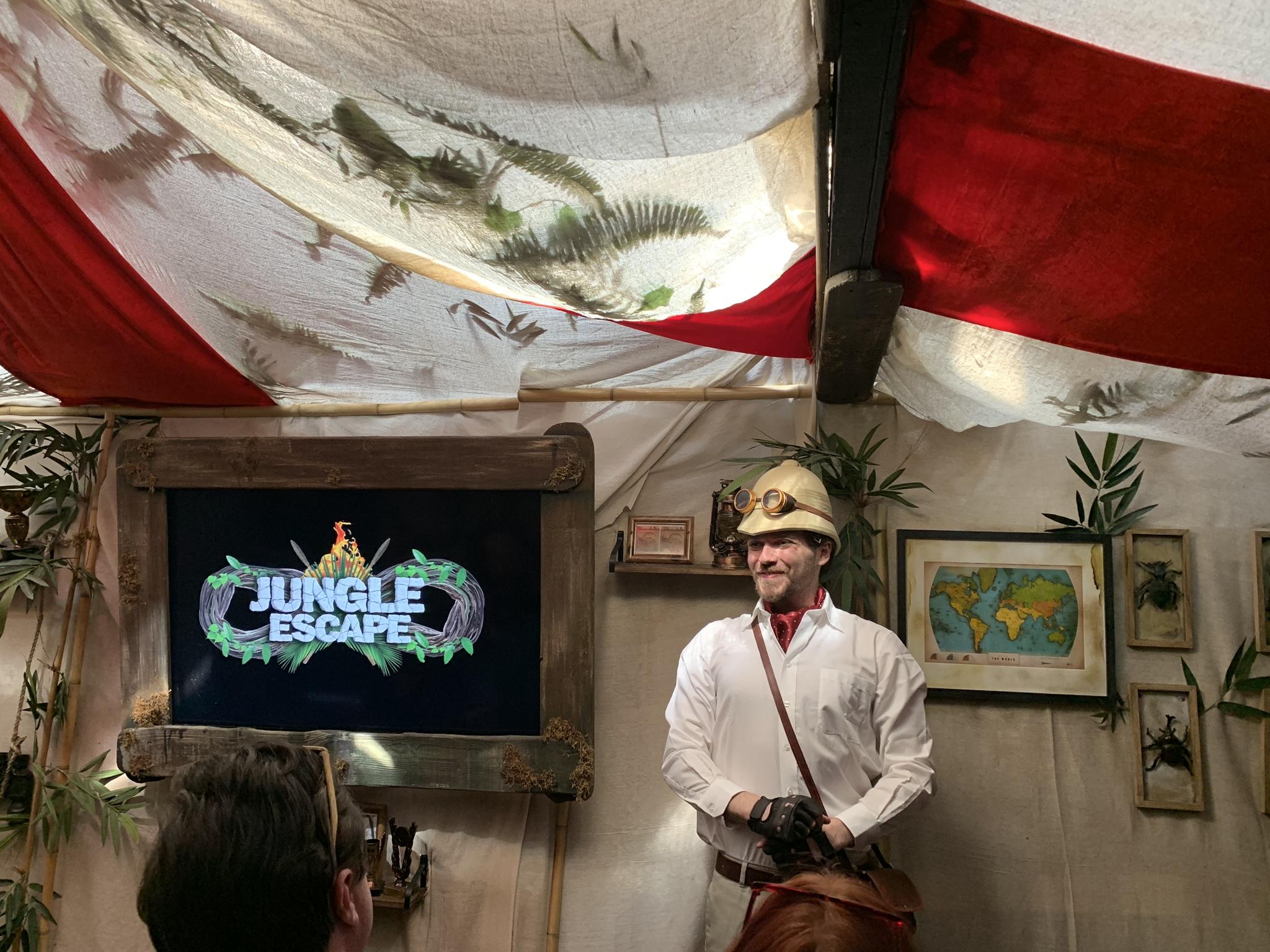 When it’s your turn to enter, you’re greeted outside by a Jungle Explorer who works their magic on the groups and gets everyone on side, laughing and ready for the briefing. You head inside what was the old I’m A Celeb briefing room, which has been resized and redesigned in a really clever way - it absolutely looks the part of an intrepid explorer’s lair! Here you receive a video briefing from The Huntsman - who you quickly find out has led you into the Jungle under false pretences - he has grown bored of catching animals - he now wants to catch… you! He’s willing to give you a chance to escape - though he will only let one team free, unharmed! He tells you about Element Crystals - and that it is your job to try to complete the tasks in each room you find, before the other team. If you are successful, you will get one of these Element Crystals. The team with the most, will be allowed to escape unscathed! The other team? Not so lucky!

In terms of the challenges, there are initially 2 puzzle rooms for each team - while you can’t see the other team at work, both sets of puzzles are the same. You have 7 minutes per room, with a clever timer above the door, made of 7 red lights - one goes out each minute, which really adds to the pressure! We managed to complete one of the puzzle rooms successfully and get one Element Crystal. The puzzles are well designed, thought out and executed brilliantly - it is clear that these have been designed by professional puzzle people - the same people behind the Crystal Maze! In fact, in terms of structure of the entire experience, it does have a lot of Crystal Maze vibes to it - maybe more so than an escape room, but this isn’t a bad thing! 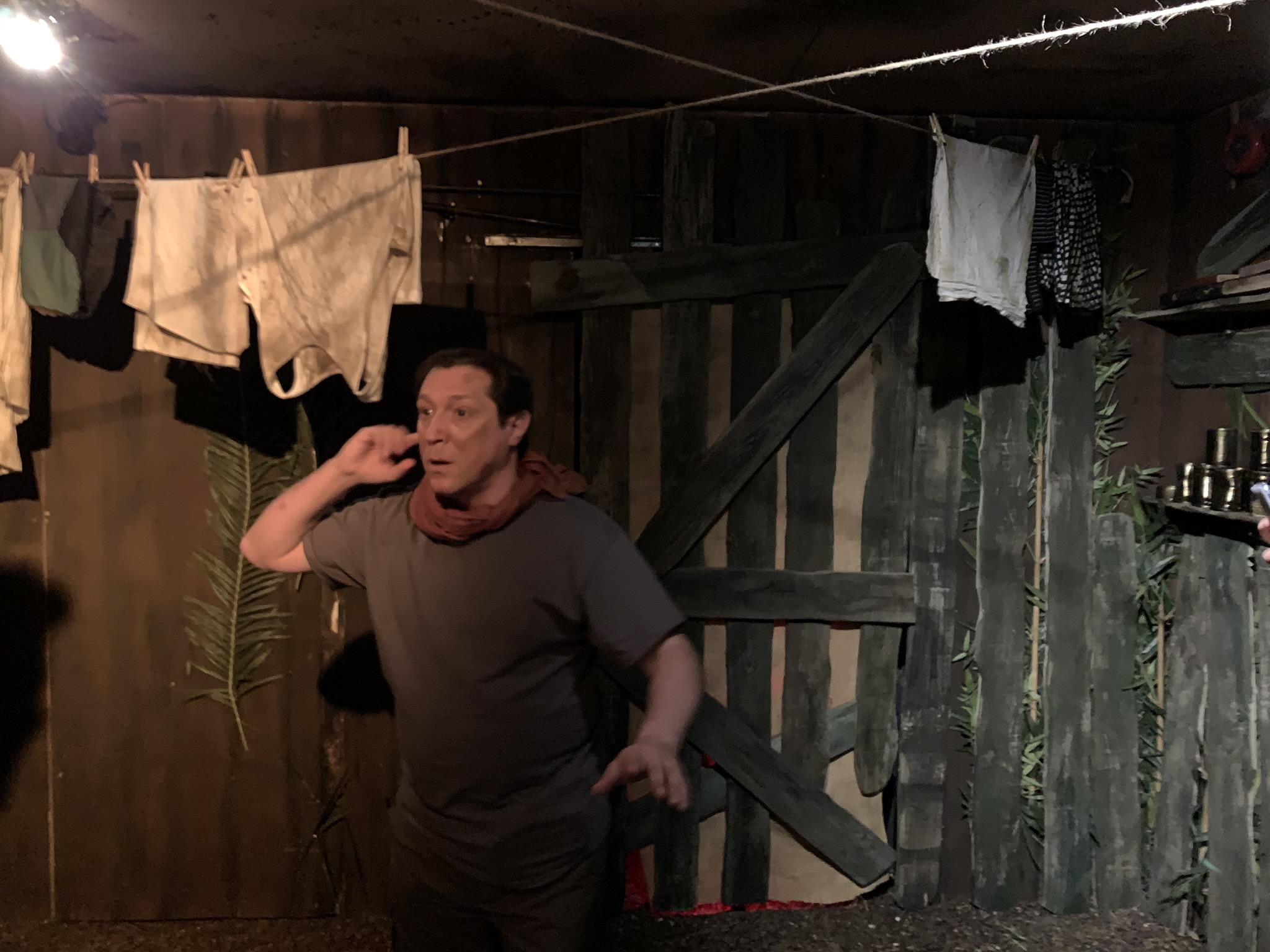 The experience has a clever (evil) twist delivered by an actor in the old ‘Outback Shack’ room (also almost unrecognisable). You discover this sinister twist and give the Element Crystals you’ve won to this actor - who uses them in a very clever invention! Then everyone has to flee for their lives, because The Huntsman doesn’t plan on letting anyone escape - that was never his plan at all - he lied!

Both teams merge together at this point and you head to the old ‘Celebrity Cyclone’ area of I’m A Celeb. While the fans are gone, there is a clever 2-part physical challenge installed here, which everyone must complete in order to succeed at your Jungle Escape!

Three summary points. First up - the fun. THORPE PARK have hit the nail on the head with this attraction. It’s fun, silly and on occasions - hilarious! During our two run throughs, we experienced it in groups with couples and friends on the first time through, and a family on the second time - and despite the huge mix of ages, everyone enjoyed it - laughing along, and clearly having a great time! 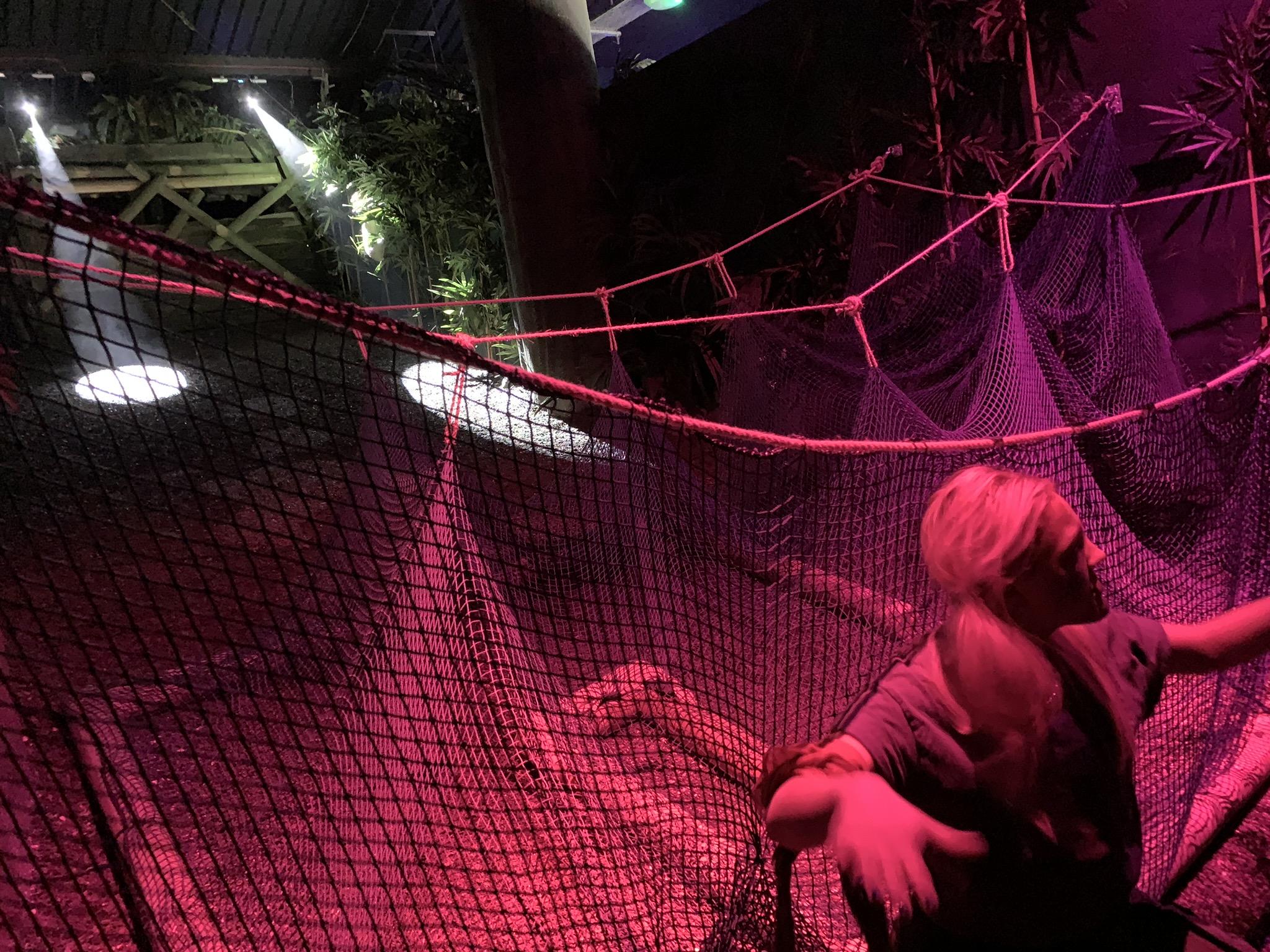 Next up - the set. The set pieces, puzzles and challenges installed are big - and impressive. They have a real Crystal Maze quality about them, but as they were created by the team behind it, that makes sense! The way the old I’m A Celeb areas have been changed, tweaked and in some cases, have had walls moved - is terrific. It also gives you a chance to take in just how well themed the whole building is! There’s not a single section that doesn’t immerse you. Did we mention the killer soundtrack in the background? It really adds to the tension and produces a real sense of urgency to complete tasks and escape! Unlike more conventional escape rooms, you can’t ask for clues - though when you enter each section, a cryptic riddle can be found somewhere in the room! After that it’s over to the 6 collective minds in the room to figure out what to do - and that makes it so much more exciting. Everyone gets involved straight away too - because you know the other side of the wall, the rival team is trying to beat you!

Finally - the actors. Live actors feature in the attraction, and their levels of energy and characterisation is at a fantastic level - one that has genuinely raised the bar for other actor-led attractions on park. From the jungle explorer you meet at the start, to someone the Huntsman captured, to a crazy explorer who really, reaaaaaally loves the Jungle and can’t wait to help you escape - it’s impossible not to leave the attraction smiling. And don’t panic, the final moments of the attraction ensure you go out on a high - and yes, there’s still a slide!

The entire experience, including the briefing, puzzle rooms, actor led parts and ending, took us about 40 minutes. If they’d had more space in the attraction, a third ‘puzzle’ challenge for each team (before the all-team finale) would have been the icing on the cake, but you still don’t leave feeling short-changed. Tickets are £10 on the day, £9 in advance and £8 for Annual Passholders. It’s exciting that THORPE PARK have taken the well known Escape Room concept and put their wacky twist on it. It’s something completely different and well worth a try - we’d really recommend it! Will you beat the Huntsman and flee the jungle? Use your wits and head to Jungle Escape to find out! 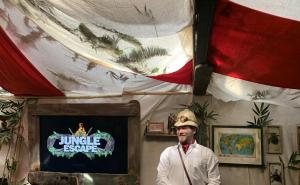 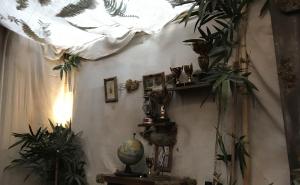 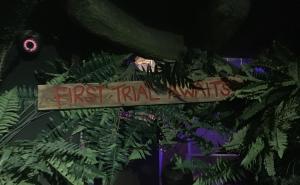 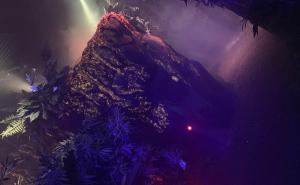 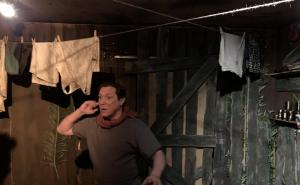